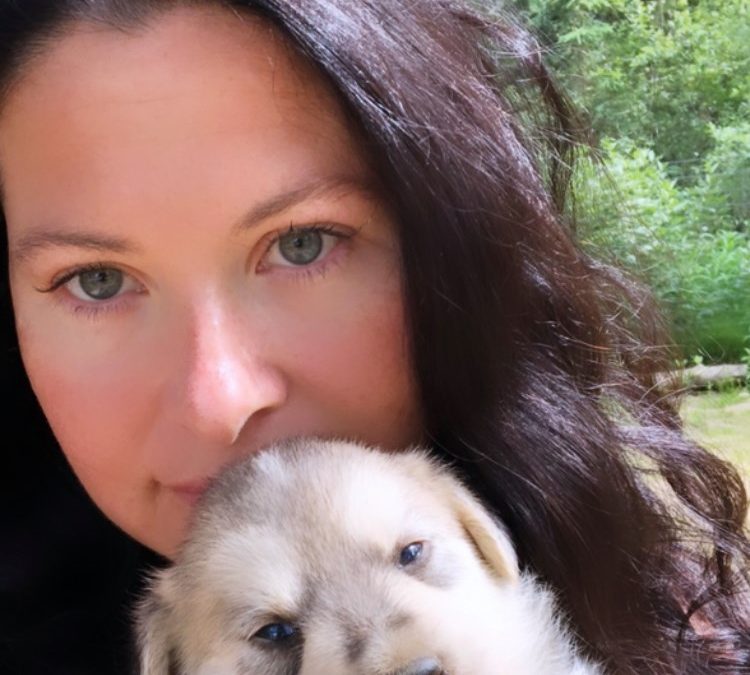 Who’s Brenda Mackey? This has become a funny tag line thanks to someone asking the question on a recent Iditarod forum after reading my name on the signup list. I come from a family of mushing Mackey’s. I’m a third generation Mackey musher and the first woman in the family to pursue the mushing lifestyle and embark upon running the Iditarod. I currently own and operate Mackey’s Alaskan Distance Dogs, a competitive racing kennel, with my husband and kennel partner, Will Rhodes.

I began running and racing dogs, actually just one dog, at the age of three. His name was Fritz. Fritz was on my dad’s winning Iditarod team as a two year old, but due to developing gastrointestinal issues from eating rocks in the summer months, followed by an extensive surgery, he was unable to race long-distance competitively and became my one-dogger for kid’s sprint races. Fritz, of course, became my first favorite dog.

When I was a kid my family lived an off-the-grid lifestyle at our homestead in Trapper Creek, Alaska. In 1990 we moved to Nenana, Alaska after my grandpa Dick suggested we move to the road system for easier access to supplies, the convenience of electricity, running water, and the modern landline telephone. I chose to homeschool in order to devote as much time to being with the dogs as possible. We generally did not have dog handlers – we did all the daily basic dog farm chores and training as a family, and I’ve kept with that style, operating my kennel with only the help of my husband and daughter for the past 10 years. I have always been passionate about breeding, raising, and training dogs with the goal of creating high caliber athletes. I bred my first litter at the age of 13 and we maintain genetics of those dogs in our current bloodlines today. I started developing those yearling dogs the following winter. In 1997 my dad won the Yukon Quest. I was so inspired by having helped him train his team and develop two of his yearling finishers, that I signed up the following year. I finished the Quest at the age of 19 with a team of yearlings, borrowed dogs from family friends, and some golden oldies from the family kennel.

In 2000 I met my husband, Will Rhodes, working as a sled dog tour guide on the Mendenhall Glacier near Juneau, Alaska. By 2002 we had accumulated 23 dogs together, but life took us in another direction with the birth of our daughter Isabel, and in 2003 we fully embraced finishing college and raising our daughter to the age where she would be old enough to take part in our dog mushing dreams. The first dogs Will and I bred together during the summer of 2001 are the primary foundation dogs of our kennel today. They are the parents or grandparents to most of the dogs we breed, train, and race today; bred from generations of Iditarod, Yukon Quest, and championship sprint dogs. We’ve bred and developed numerous competitive dog teams over the past 10 years with many successful mid-distance race finishes.

When I was five my dad asked me who I thought was going to win the Iditarod. I replied, “Rick Swenson” (I’ve always been direct). He laughed and said, “Nope, I’m going to.” My dad ended up winning that Iditarod, which helped instill a desire to chase that dream myself. Many thanks to the endless support of my husband Will, who works full-time year-round as well as being my training and racing partner; our 17 year old daughter, Isabel, who often keeps the home fires burning while we’re out with the dogs; my brother Roland, and my parents Rick and Patti.

Roland and Comanche after the Tripod Race 2020

Will playing with pups spring 2018.