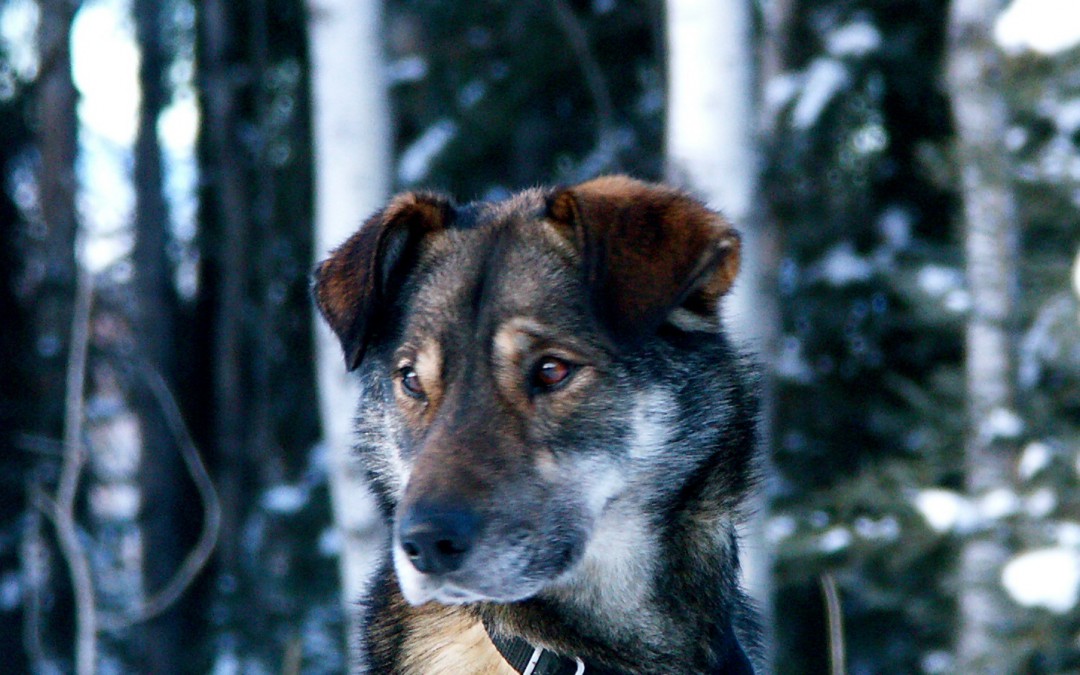 Saturday Will lost the end of his right hand index finger working on his scooter brakes. I figured he’d hurt himself on it, but thought he’d wreck. Sunday we lost one of our greats, Outlaw.

Outlaw was a unique dog in so many ways. He was born September 5th, a late litter for our kennel, but the kennel was young in 2012. Only our 2nd year back into breeding dogs and due dates seemed irrelevant at the time. Because they were born late they missed out on all the summer adventures typical to our pups. Being such young yearlings going into fall training the following season they were more immature than the older pups. Bolt and Sherpa were naturals. Driven, big strong, beautiful movers. They didn’t need much training just conditioning. Stinger fell in between the seriousness of his brothers and the immaturity of Outlaw.

Outlaw was not the high drive instant on the tug type we are use to developing. His focus was terrible. He’d run along not pulling for entire runs, for several hour runs on the ATV, pulling sideways to reach his face into the grass as the rest of the team pulled him along. Will said I don’t know about this one and we nearly gave him away to a pet hime. A lazy sled dog is not one that can be sold. No one wants a lazy sled dog. A little slower, gait not perfect, doesn’t have a ravenous appetite, those are fine reasons and can be very helpful to other teams. But lazy, no. I just watched him. I didn’t say much to him. I wanted to see if it would naturally click. I’m a very calm and quiet trainer. I don’t get frustrated evaluating young dogs and if I see something special I’m really patient to let it unfold without much coaching. I know where to put them in the team to best set them up for success and we run them. We run them and run them and run them. That’s how breakthroughs happen.

His movement was the best I’d ever seen. So much so that I didn’t want to give up on him. He just had to bring his head into the mix. In 39 years looking at dogs in front of me I’ve run over a thousand sled dogs, maybe more. I don’t think I’ll ever see one quite as beautiful as Outlaw in the gait department. His son Ox and nephew Hooligan are close. After two months of steady, serious, training, he still wasn’t showing much improvement. December came and he was still lazy. We just kept running him. He made a breakthrough the end of December and that was it. A champion by March at only 18 months old alongside the rest of his brothers. Outlaw was never injured or dropped from a race during his lifetime.

What made Outlaw’s gait so special? It’s a seeing rather than describing topic, because unless you’ve seen a perfect moving dog there’s no way to compare. It started with his gait, but you could feel the momentum of his movement watching him when he’d turn it on and get into that mode. It seemed to radiate along his back and into his front legs. He looked like he was dancing so lightly on his feet. Outlaw could seamless transition into a lope, but spent most of his runs in a fluid fast trot. Often when we evaluate gait we’re looking at a dog’s backend. There are things in the front that are often not as easy to see. He moved perfectly all over.

Outlaw became a main stud in our kennel because of that remarkable easy movement. He never once appeared tired, he never missed a meal even on the day he died, he was always happy and high attitude. He brought a lot to the table. Outlaw never progressed past the 2nd wheel and mostly spent every run of his life in wheel. He could best focus there and it’s a tough position physically. It takes a lot of stamina to to run in wheel. He was just the right size to quickly go under the main line if he needed to and then quickly scoot back over. Outlaw is the father, grandfather, and great grandfather to many dogs around the globe. This summer we did a fairly heavy line breeding between his daughter with Salt, Lusa and son with Oreo, Ox. We were very excited about this litter, but Lusa had to have an emergency spay after losing the litter about 5 weeks into her pregnancy.

After 14 solid races Outlaw’s racing career ended sooner than expected. In December of 2017 we were training out of Nenana and took a familiar trail. Unfortunately that winter heavy machinery had torn up the trail eradicating one of the main trails in a costly project that amounted to nothing at all. We bypassed that big mess and ran across a short section where they had been. Right over freshly cut brush. We were running over sharp approximately 8 inch tall sharp sticks. It was a career ender for Outlaw who had never been injured or dropped from a race. He only gave slight indications there was a change. Ironically he never lost his tug, always kept it tight. But he started licking his foot and traveling in a lope. He just wasn’t 100%. I could see it in his gait change and new found love of obsessionally licking his foot. The vet felt he had permanent nerve damage. He took the rest of that season off and trained with us the next two seasons into December. We didn’t take him out for any runs over 50 miles and mainly trained him because he loved it so much. As soon as we’d see him loping more he was done running with the main team for the season.

Outlaw spent most of his training and racing life running next to his longtime partner Captain. They lived side by side in the dog yard and spent many hours, playing, grooming each other, and sleeping next to one another. Captain went on to be an important veteran dog for my friend Juliah and Outlaw’s new partner was his brother Stinger who he’d ran with quite a bit in the beginning of his yearling season.

He had many nicknames; Goat Paw, Skunkle, Little Buddy, to name a few. Why he had such a wide ray of nicknames I can’t say. Everyone in my family had their own for him. Outlaw never used a dog house. Not even at -50 below. He preferred a fluffy bed of straw.

My most memorable image of racing Outlaw is very vivid. He was only 18 months old. As were his 3 brothers. I hadn’t raced in a 200 mile race for around 15 years. Our team was so young, so green, but very athletic and fast. I knew they were the kind of team I’d dreamed of putting together, but I didn’t have grand expectations going into the 2014 Old Mail Trail 200. Uncle Lance and Hugh Neff were there. Bill Cotter, who had a very hot mid-distance team at the time. Thomas Lesatz, another rocket ship fast team in their prime and the hungry Jessie Holmes among the top drivers in the race.

It was a tight race after we left the halfway. I had one minute on Thomas after 88 miles. About 6 miles after leaving Manley Thomas, who had been stealthy traveling behind me with his light off, passed me at a pace with some serious intent ski pole flying as he pushed on by. I thought already? Man, we have a long way to go to travel at 13 mph. I let up on my drag mat just slightly. I couldn’t let him get out of sight, but I wasn’t going to start bringing out all my speed yet either.

The first year of that race there was a required one hour stop at Tolovana Lodge about 50 miles from the halfway point. I stayed within sight of Thomas. Dropping down into Tolovana can be a wild ride and never more so than it was that night. We were flying, just ripping as we wound through the tight trees, literally barely dodging them, as we navigated endless glaciated ice mounds of overflow between the trees. How we stayed up right, I don’t even know, losing oneself in the zone I suppose. The moon was huge and I’ve never seen a more gorgeous moon as we traveled closer to the lodge. It hung low and bright over the frozen river to the right of the trail we were traveling on. There was a redness in the moon clouds around it that were just incredible.

We pulled in pretty much neck and neck. Ryne Olsen was managing the checkpoint and they had a beautiful spread of food for mushers. I was too keyed up to go inside and eat. I left my team only to walk around the building to the outhouse. I walked past Jessie’s team, he was within striking distance as well, but his dogs weren’t eating and had a look on their faces I knew wasn’t sustainable. Ryne came over to see if I needed any help out of the area, but I just made my clicking “everybody ready noise” and Folsom jumped to his feet in single lead pulling the team towards the finish. Thomas ran without his light so we really had no idea where he was. Jessie wasn’t too far behind me, but he was working and I was still on my drag. The morning light started to open as we came through Old Minto. There are big swamps where you can see for a long way. There he was. Also working like demon on that ski pole. The three of us made me think of sail boats. The triangular shape of a sled’s silhouette in the vast whiteness. I looked at Outlaw in wheel and thought I can’t believe how far you have come and how young you are. His brothers, too. But Outlaw was the late bloomer of the four and here he was pouring it on with such gusto. I always see him in that moment in that massive swamp of white so cold in those wee hours when I think of how Outlaw looked racing.

I looked back at Jessie one last time. I thought these guys are physically working so hard and I’m riding my drag. I was pretty certain I could walk away from them anytime I wanted to. I took a little pressure off the drag. 30 more miles. I started to close in a little faster than I wanted to on Thomas, but we were now out of Jessie’s sight. 12 miles out. Thomas would stride that ski pole and look back over his shoulder. Over and over he looked back, hopeful for distance between us. I watched him give it his all. I wondered at what point I should overtake him. I was having so much fun as the hunter I was content to keep the pressure on him. 6 miles out he consented and pulled over for me to pass him. Then I let them rip with every bit of speed and strength they had. That young team is one of the best I’ve had the pleasure to experience. They were such a gifted group they just made it seem easy. We were very lucky with that dog team. Pan and Sherpa are the only two dogs left from that original team, still on the team. Outlaw was a huge asset to our kennel and his legacy will live on. RIP little buddy.

Captain and Outlaw in perfect sync about to cross the finish line of the Old Mail Trail 200.

Training on the Denali Highway.

Giving a rie to my mom’s friend after the Tripod race.