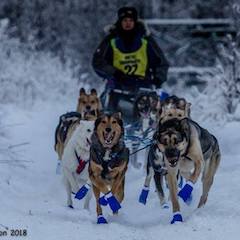 First off a huge thank you to the volunteers who make this race happen. The backbone of this race is put on by the same volunteers who pull it together every year. Kit, Jen, Harry, and Bob. This was DeeDee’s first time as a race judge, but she is no newbie to this race. She was the only woman to have taken 2nd place until this year with a woman not having won this race before. I’ve known DeeDee since I was a toddler and she has been very inspirational to me over the years. Her and my dad traveled many Kuskos and Iditarods together. I always enjoyed his stories of their time on the trail together. DeeDee and Sue Firmin collaborated on a breeding together in 1992 and split the litter. Sue was having financial struggles and was forced to sell her two best 2 year old leaders, Cindy and brother Commander bred from Dolly x Elroy. Those 2 dogs became Yukon Quest champion leaders as 3 year olds and Commander is our primary foundation dog. To say I’m grateful to DeeDee and Sue would be an understatement. Kingpin is the closet dog I’ve seen from this line to strongly resemble Commander as much as he does. When my dad decided to buy Commander he clocked him trotting 18mph on the ATV. Totally unproven young leaders who cost a lot of money, but my dad was very impressed. Cindy was more of the brains of the 2, but hey she’s a girl.

Thank you to my husband Will, my parents, brother Roland, Isabel, and Mirabel for helping behind the scenes to make it all a go. Isabel was diagnosed with Mono the Wednesday before the race. Her and Mirabel were set to keep the home fires burning and the dogs staying home cared for. She was couch bound with no energy for a few days, but thankfully started to feel better by Saturday. The girls did an excellent job keeping things running at home. My parents and brother decided it would be fun to come to the race and be as involved as they could vs sitting at home looking at the tracker. This was the first Knik 200 where mushers could have handler assistance, which was an interesting surprise announced at the mushers’ meeting. Will and my parents were an enormous help at the break and we had a really good time. I haven’t raced with uncle Lance for a couple years and him being there or at any race just makes it more exciting for competitors, fans, and anyone who knows my charismatic uncle. His son Atigun is about the cutest little guy ever and Jenne is just an amazing woman. We really enjoyed spending time with them in the race atmosphere. Nic Petit is one of my favorite competitors as he’s super funny and really motivates all of us to step it up a notch. Another notable team is Ray Redington’s. He always has a powerful looking team and they’re very enthusiastic.

My team included 5 rookie dogs to this race and 7 veterans. Pan, Kingpin, Oreo, Salt, Monarch, Sherpa, Flash, Smarty, Stinger, Hooligan, Brave, and Grizzly were outstanding for me and such a pleasure to feel in front of me. 2 year olds Monarch and Brave had never raced before this weekend and 3 weeks ago wouldn’t have been the top choice 2 years to take on the race. Pharoah came off a last long run a little sore and despite looking fine a couple hours after the run we didn’t want to risk any chronic injuries and laid him off immediately. Spark has been one love sick fool. I decided to leave him out one hour before the race start as he was going so crazy for his in heat momma Salt. Over the last month traveling and camping with 2 in heat females has been a real distraction for the boys. This is our first year of having so many girls in the team. Will was strongly encouraging me to take Spark , but I chose Oreo instead. I just didn’t want to deal with that level of crazy boy energy. Oreo isn’t as fast as young Spark, but knows how to race and she was fantastic in swing the whole way with half sister Salt. Monarch absolutely rocked this race next to Sherpa in second swing. Those 2 dogs were a real standout pair, loping the entire race in an easy canter. Just 6 weeks ago I almost sold Monarch because she wouldn’t gear up into a lope and I pegged her for being limited to distance or a slower paced mid-distance team, a trotting dog without the versatility we want in our dogs. She started to really transform over this past month and taught us a lot. Interestingly Folsom’s son Torch was the exact same way as a 2 year old. So we learned we had better be more patient with selling our young dogs because Monarch has developed into one gifted dog. We’ve only had Brave 2 months having bought him from my uncle Jason’s kennel sell out in October. He was not a first round pick, but our super wheel dog Outlaw got a stub (cut brush) related foot injury the week before the race and had to sit this race out. Brave was so green when we got him he appeared to have never had a bootie on or been harnessed much for that matter. He has developed into a really good dog with a promising future ahead as he continues to mature. One of his best qualities is he doesn’t get tired, ever, he has the exact type of endurance we look for in a dog. He doesn’t always drive as hard our dogs (which means he doesn’t gear up into a lope as naturally, but he is still developing), but he eats like a monster, has high attitude, and maintains a nice trot. Pan, Salt, and KP were superb. I couldn’t ask for more and Pan is such a dynamite leader navigating the best trails and listening perfectly on the river. If you’ve never trained or raced on a wide open river with lots of trail choices having a flawless navigator is instrumental. This is not something dogs do naturally, it is learned over time. Fender led for our friend Juliah’s 100 mile race this weekend and came through as such a standout dog she said he caught the eye of several top contenders who offered to buy him. He is a good leader and a very dependable dog who will be a part of our kennel until he passes on in life. We are expecting a litter out of him and Minty on 2-13.

We strive for a sustainable speed and powerful finishes. That means we want the team to finish as fast or faster than they started on these mid-distance races. My GPS reflected we did just that with a moving average of 11.1 on both legs. Not our fastest race, but not our slowest, and we gained time on our second leg over the other top contenders. For anyone looking at how mushers race this has been our style of racing for the past 4 years since we’ve been back at it. Having raced Nic last season I could see he is a very aggressive racer in the first leg of a race and I knew if I had a chance to beat him I was going to have to let the dogs open up a little more on the first leg, but I didn’t I raced like I always do. As a teen I was not a conservative racer and it only took me twice to realize I didn’t like that style of racing. I ran the Quest in a go for it manner because I was clueless and promptly dropped a lot of yearlings right off. Having to run 500 miles of the race with 7 dogs wasn’t easy. That taught me to manage teams in the future. My dad was always a come from behind racer and turns out that’s the way I am, too. I’m the most comfortable on the hunt and the least comfortable as the rabbit. I do however need to be faster at getting my snacking and short stops done. Looking at the tracker info it appears that I took almost 3x as long stopped on the trail as almost anyone in the race. I’m not sure it’s accurate. I don’t know how I could’ve possibly stopped for almost 19 minutes compared to the average of 8 minutes per team. So I’m trying to wrap my head around where that happened. I didn’t draw a good number for a speed race, because I had to do at least 40 passes from behind and head ons with the format. With the exception of the first pass in which 2 ladies were tangled up on a narrow section of trail called the “Hunter’s Trail” and I had to wait all the other passes were really clean. I did stop and wait to discuss if we were on the right trail in the swamp with Jon Vaderwal (since he lives and trains there), because there was one place I questioned. That took at least 5 minutes, but that’s all part of racing. Every minute counts and there is always room for improvement and every race teaches us something.